"OK, Google" hotword detection on any screen in Android! Even with the screen turned off? 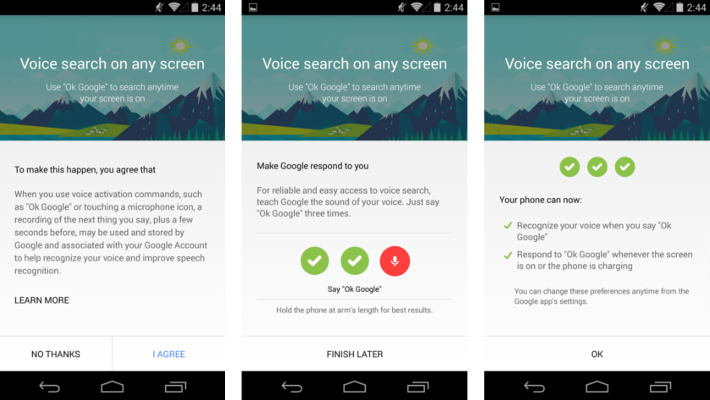 During Google I/O, Google announced a slew of new designs, services and products to get us all through another year of computing. We've taken a look at their new design principles, had a peek at what their new apps and services may look like and more, but Google did not say a word about an update to Google Search.

The Google Search update, coupled with the updated Google Play Services, will allow most devices to activate the "OK Google" hotword from any screen, not just the Homescreens, or just the Google Now interface, as is currently available.


For those that don't know, "OK, Google" is the main phrase used to trigger the voice recognition and voice action software within your Android device. As I mention, not all devices have this function, but most do. Most of the capable devices require the user to head into Google Now before they can begin dictating actions. Some devices, like the Moto X, allow the user to activate the voice controlled search from most locations on the device.

Google's newest approach takes the hotword detection beyond what we've already seen. Users will be able to yell out "OK, Google" at any time the device is turned on, including while at the lock screen. Wording in the fine print eludes to the idea that it can even operate while the device has the screen turned off. But we've been unable to confirm this.

For more details, head on in to my Android Authority post.

Do you want "OK, Google" functionality to trigger from anywhere in your device, or, like me, do you prefer to keep it to a confined location within Google Now?

Published by JonathanFeist at 2:09 PM