This is not a full feature list, just a few items that make a difference for my testing.
(And again, this is pure Android straight from Google, I will ignore all custom and manufacturer ROMS, for now.)

There have been many visual changes to the system. I will compare exclusively to Jellybean, but know that every version has had its own changes, improvements you might say, along the way. As soon as you boot the system, you notice the change in the boot animation where a small orb of 4 circles spins around, which is actually a significant visual change from the somewhat eerie alien rotating glow around an "X" that was the Jellybean animation.

Once the boot animation is through, you are welcomed by the lock screen. Minor changes here. Myself, I use a lock pattern and instantly noticed the dots were now actual dots, and no longer small circles. This, in itself, is a small thing, but you will find many elements throughout the system that are best described as 'more solid' and/or 'rounder.'

Battery Life:
No joking around this time, actual battery life info. Instead of throwing had numbers at you, let me just give you my impressions, which are pretty simple, Screen-On battery life: no noticeable change. Screen-Off battery life: Whoa! They did it. This obviously depends on your usage, and whether you are using a phone versus a tablet, but for my 2012 Nexus 7, my battery life has been extended about a good chunk of hours of Screen-Off time. Usually the Tablet sits mostly unused for about 3 hours during morning work hours, jellybean would drop to 95-96% from full, now it hold 99% after that same time. This is a huge improvement, however, by the end of the day I have to plug in, just as I did before, so there is, in effect, no battery life change to speak of. Sorry. I do hope you experience better results.

Function:
I have one specific item that I wish to speak of. A HUGE item that i have purchase many different apps to accomplish this same task, Full Screen apps with 'persistent' Notification Bar. I suppose this is really two things, so let's discuss: 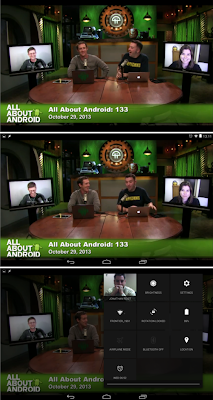 Full Screen apps functionality. In Jellybean, all full screen applications where never truly full screen, as the system navigation buttons always remained. That is your Back, Home and 'previous apps' (we'll call it) buttons at the bottom of the screen, they lived on a black bar that took up roughly 65 Pixels of valuable screen real estate. For most full screen apps, the buttons themselves were muted out in intensity, so that they did not detract from the application on screen, such as a movie, and it did this very well. Now, however, Kit-Kat brings us true full screen, completely removing the navigation bar allowing your movie to play truly full screen.

Persistent Notification Bar. This is where the magic lives. For all non-full screen apps, your notification bar lives at the top of your screen, always there, always providing the time and a reminder of your new emails. This navigation bar used to go away when in a full screen app, requiring you to exit the app to see the time or a notification. This is no more, now, simply pull down from the top of your screen and the notification bar pops up over top of your full screen app. Maybe not truly 'persistent' but I cannot think of a better implementation. This is also how you re-acquire the Navigation bar at the bottom to exit the fullscreen apps. From there, you can check the time, peak at your incoming messages, even change the screen brightness all without exiting your running app, even without interrupting it, as many other actions would.

If there is any particular features you would like me to cover, please mention in the comments below, otherwise, please check back again later, I will continue my coverage of Android 4.4 Kit-Kat in future posts.
Published by JonathanFeist at 1:28 PM